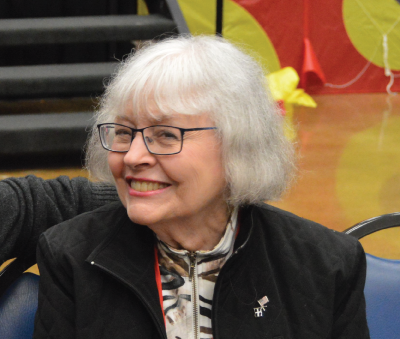 This letter is to nominate Valerie Govig for the Steve Edeiken  Award.

We have Valerie to thank for our Association.  In 1976, she bought Kite Tales and the American Kitefliers’ Association from Bob Ingraham.  In reality, the AKA was merely a mailing list of subscribers to Kite Tales.  Val gave the organization to a group of kitefliers, wrote the first by-laws, and organized the first convention in Ocean City, MD, in 1978.  By the end of that first meeting, we had the independent AKA we know today.  During the first year, she let us use the mailing list and gave us much-needed advice.

Valerie’s involvement in kiting began long before her founding of the modern AKA.  She and her husband Mel discovered kiting while living on the West Coast in the early 1960s.  They began a kite festival in Baltimore County, Maryland in 1967, and soon after founded the Maryland Kite Society.  The Govigs and the MKS did kite-making workshops for kids, created slide shows for schools, scout groups and community organizations.  They got me, and many others, interested in kiting.

Valerie has dedicated her life to kiting.  Among other things, she published Kite Lines for 24 years, wrote freelance articles about kites and kiting for a variety of publications, ran a kite bookstore, promoted kiting, and ran festivals, workshops and retreats.

I have known Val for 50 years, and she has always been a source of knowledge, history, and “evangelism” for kiting.

We owe our very existence to Valerie Govig.  It is time that we honor her with the Steve Edeikin Award.