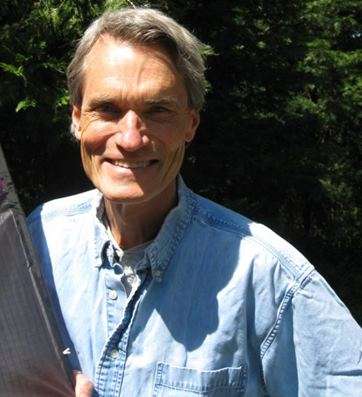 With grateful thanks and admiration for his many contributions to the world of kites, we’re delighted to nominate Daniel Prentice for AKA’s 2022 Steve Edeiken Award.  In all his efforts for so, many years, he has exemplified the key characteristics of Steve Edeiken, showing friendly, loving, fair, and even-handed concern for:

Decades ago, since the earliest days of AKA, Daniel has been working to spread the joy of kites to others. Working hard but never asking for the limelight, he started his own company, Shanti Kites, in 1974.  Originally focusing on kites, Shanti is now famous for high-quality kite spools and kite line.  A member of the AKA since 1975, he attended AKA’s first convention in 1978 where he was elected vice president of AKA’s first board of directors.  He later became the second president of the Kite Trade Association in the 1980s and started the American Kite Magazine in 1988, which was continually published until 1999.  He created the first national sport kite circuit and helped develop the World Cup Sport Kite Championships, running the events for seven years.

Daniel currently serves AKA as both Executive Director and Editor of Kiting, doing the work that previously required two persons. This work is always accomplished with grace, humility, good spirits, and the highest level of professionalism, always citing the contributions of others.

Since the 1970s, he’s been a leader in spreading joy and their love of kites and kitefliers to everyone he meets.  Few people have worked so hard and so long to ensure the success of kitefliers and the American Kitefliers Association.  He is a truly deserving recipient of AKA’s 2022 Steve Edeiken Award.

I have personally known Daniel Prentice since 1982.  Most of my experience with Daniel has been with the specialty kite trade however, I have also known his heartfelt work with all kite fliers both nationally and internationally.  As a businessman in the kite trade, Daniel sourced and produced the highest quality

kite products in the world.  All kites are tethered devices and Daniel set the absolute highest bar for quality line products in the entire kite industry.  Kite retailers all over the world will tell you what a joy it is to work with Daniel and that the products from Shanti are second to none.  He is calm, friendly and always strives to produce the best kite products for his customers and end-users.

From the standpoint of the world of kite fliers, Daniel’s creation and production of “American Kite” magazine was paramount in bringing kite people together and sharing a wealth of technical kite knowledge and event news.  But more importantly, Daniel focused on kite individuals.  Once I asked him about what he was hoping to accomplish with “American Kite”.  He stated he wanted to produce a publication that focused on the people of the kite world as much as or more so than just the kites of the world.  And with his creation of “American Kite”, he did a brilliant and professional job at revealing and sharing the unique human elements of our world of kite flying.  Daniel continues this vital endeavor for all of us with his tireless efforts as editor of “Kiting”.

Thank you for the opportunity to nominate Daniel Prentice for the 2022 Steve Edeiken Kiteflier of the Year Award.  I firmly believe he is an outstanding choice for this award.