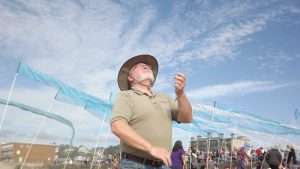 1. Why did you pick to host a workshop FROM SKETCH TO FLIGHT. 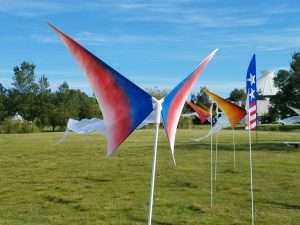 Because I am special. (Giggle…) No, I just wanted to share how I do things. I wanted to have an example of how to apply all of the concepts of digital design from start to finish. I thought it would be a good flow from one step to the next and help others see the process
When I was asked about having a sewing workshop, I thought this would be a perfect project because you have to work with difficult and dissimilar materials. It will also take them through how we started the process of seeing something in what was scrap material. They can make one in the workshop, then take parts home and build as many as they want.
2. How many AKA Conventions have you been to? (counts…. while naming off locations) Somewhere around 10… 10-ish
3. Why should someone who has never been to the convention, make the decision to come?
Uhm, the camaraderie, and the expanding your knowledge of kiting and also the diversity of people. Not only in kiting, but you find that you are at the table with CIA analysts, Doctors, Lawyers, Joe Blow factory workers, and the commonality is kiting. For the most part is is non-judgmental, it is inclusive, and if there is a natural disaster they are the group I want to be with.Because really…. Kiters can solve anything.
4. As you run around through out the day, what do you use to keep properly fueled and on the top of your game?
All of the stuff that is in my brain. I am a maker, I have been a maker all my life… that is what drives me is making something new. If I am having a hard time getting started I turn on Talking Heads or watch some TED talks or a documentary on an artist that had a hard life. Then all of a sudden it is off to the races
5. Often times our presenters are hosting workshops at the same time other workshops are happening, so they might miss out on something 🙁 What one workshop or event are you bound and determined to go to, even if it means you have to dress the President up in your clothes and makeup to fill in for you?
It is going to be a toss up between Douglas Stout Glider Aerodynamics or Ron Gibians. I am really intrigued with the swept wing forward glider kites. I have been a long time friend of Gibian, and always love what he has to present
6. If you have been to a Convention before, what is the most memorable workshop/event/roundtable you ever went to, and why?
“Hmmm, I have never been to one, I have always been a presenter or in part with Ronda. (wife)  We are always volunteering or doing workshops at the convention. I am a closet educator… I just like teaching stuff. I don’t know that I ever took a workshop, wait… I take that back. I have taken Brasington’s workshop on his design process
7. A magical fairy has descended on the AKA Convention, and is going to grant you four wishes, what do you wish for?
Wow, I don’t know. The curse in my life is I have way to many ideas, and way to many projects. Trying to just focus on one is hard. So that would be wish number one, simplify my brain…. but that is not a good wish. I don’t know. I guess my three other wishes for the convention fairy would be I don’t know. I don’t dwell on wishes.
8. The convention isn’t all about competition, a big part of it is about reconnecting with fellow kite fliers. Who are you most looking forward to reconnecting with?
Mike and Cel Dallmer. We have stayed with them a few times in Philly. They are fun people.
9. You have just been elected ‘king of the kite field’ for the day. What will your first decree be?
Play well together. No school yard arguments… we are adults… and we are supposed to be having fun. God Da** it.
10. Should everyone at the convention be required to: a) wear a cape with their hidden superpower on it for one day. b) Drop what they are doing at 12:46 every day and dance with the closest person c) carry with them at all times a stuffed animal d) have access to an all you can eat cupcake buffet
B… the dancing thing. Of course Scott Skinner’s Dance Card is filled, and Jose Sainz’s too. He is a good dancer. Have you seen him dance? He is good. (Laughs)
11. What is one funny trait about you that most people don’t know?
I wont eat pretzels.  I ate a whole bag of pretzels as a kid and puked them all up. I also hate Lamb. I was in grade school and they served me mutton and it tasted like soiled dish rags. Doesn’t matter how it is prepared, I can’t eat it. I love the smell of it, but can’t eat it.
12. When you pack for your trip to the convention, even if you make a list and check it twice, what is the one thing you will inevitably forget?
Don’t know, I have possibly forgotten stuff, but not that I recall. Just put “NOT APPLICABLE” Ronda on the other hand… (giggle)
13. Do you play a musical instrument?
Not for years. I played accordion. Yep.
14. If you had a really fluffy bunny, what would you name it?
Oh… Droppings. I dunno little bunny foo foo. Or… White Rabbit. I would have to have the thing first. I had a boa constrictor when I was 19-20 and his

name was Balboa. My friend had one and his name was Julius Squeezer. Great names. But with our cat, the white cat… Bazzer (Poulter) named Ty for Tyvek. So I guess I would have to have it first, and I have no desire to have a rabbit. So I might call it dinner. When I was a chef at a 4 star restaurant in my uniform and all of that and we would sell hasenpfeffer on Easter… customers would ask what is hasenpfeffer… I would say “it is the Easter bunny”. So yah, I guess I would name my bunny Hasenpfeffer.
15. You have just opened a kite themed restaurant. What is your signature dish and your signature drink?
MMMMM. My Signature dish would be Oysters Rokkaku, would be 6 oysters on the corner of the rokkaku plate.  Or it would be a Revolution Royale. Which is 3 items together, like 3 meats together… has to be if it is a Royale. And a drink, should be a flaming drink. Falena flambe. Might have to explain what Falena’s are.. but maybe…
16. Who would you say is your greatest influence in the kite world and why?

Hmm. Ronda. She is one of my good influence and we collaborate. She keeps me focused. We have discussions, we don’t have arguments, but we have worked for 30 years together on kites. Others that I am not married to would be Ronnie (sic. Ron Gibian) for his graphic art stuff and his lovely hair. There is so many people, none really stands out. Some have strong points. Oh probably Brasington for his endless prolific output.
17. What is your favorite kite?
Wow. To make or to fly?  (Thinks quietly for a bit) God, I don’t really have a favorite kite. There are so many styles of kites. Some people say rokkaku, I could say that because we make thousands of them, but… (Laughs) But, you know, when you think about it, it is the rokkaku that has allowed us to travel and make kids kites and stuff. I don’t know, I don’t really have one. I just like them all. Some are better than others.