Tell me a little bit about yourself: 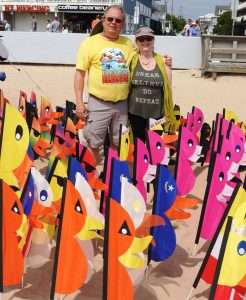 Hi, Cecilia Dallmer here, I live in Philadelphia, Pa and have been an AKA Member since 1991. I have been married 42 years, 2 adult children (Gina and Mike Jr), 5 grandchildren (from Gina) and a great grandchild on the way. I am currently the AKA Treasurer and have been for the last 3 years. I am also on the By-Laws, Convention, Rich Comras, Ways and Means and finally TYCP Committees. I also serve many in many positions with the South Jersey Kite Flyers, my local kite club.

How many conventions have you attended?
I have attended 8 AKA conventions, OC 2017 will be my 9th

Who are you looking forward to reconnecting with at the Convention?
Everyone and working on the Auction will enable me to do this so stop by even if you don’t have a donation to say “Hi”.

What is one activity that is the ‘must do’ thing at the convention this year?
I think I will say the scavenger hunt, sounds like fun and again, a great way to meet people.


Nope, most if not all of my time will be all working on the auction. 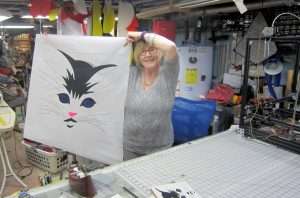 If you could give away one free pass to the convention, who would you give it to?
Someone on the Board or one of the many volunteers who work so hard behind the scenes. This year I think Philip Whitaker would be my choice for his tireless work putting together the Convention.

What advice do you have for someone who is a first time attendee?
Take in everything, meet as many people as time would allow. Talk kites!!!

You have just been elected ‘king of the kite field’ for the day. What will your first decree be?
Just Fly!!
Who would you say is your greatest influence in the kite world and why?
My husband Mike, if it wasn’t for his interest in kites, I wouldn’t be here. It started out as a family outing and it became so much more. Mike has taught me so much about listening, being compassionate and being fair, his creativity and sewing, always amazes me, maybe not anyone else but definitely me.
Are you wizard with words or a skilled sawbones, maybe you can play the whole 1812 overture with just a kazoo and a drumstick. What is a skill that you have that many people don’t know about?
My memory, Mike says it amazes him how I can remember the little things in our 46 year relationship when he cannot remember last week.