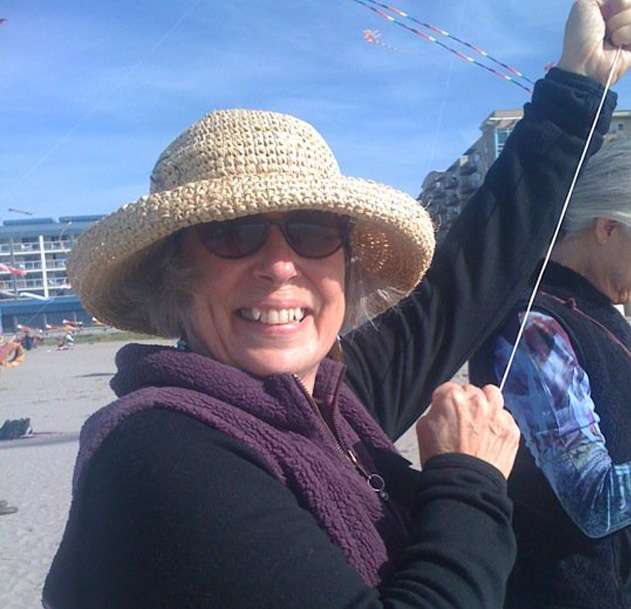 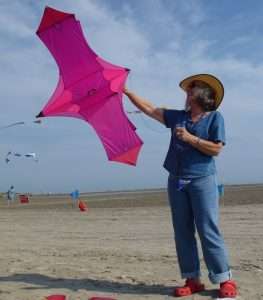 For nearly 4 decades, this nominee has built a world-wide reputation as a designer, manufacturer and retailer of kites.
This nominee first got her introduction to kiting by attending a kite festival in the mid-1970s. Soon after she started making kites under the moniker of Suspended Elevations and then opened Seattle’s Gasworks Park Kite Shop. She also started Goodwinds Kites, an outlet for kites, parts, and supplies, that featured an innovative kite parts catalog that was truly one of a kind.
Besides producing the Seattle Kite Festival for 12 years, Kathy Goodwind has served as Secretary/Treasurer (1985) and Vice President (1986) of the Washington Kitefliers Association. She was part of the group that formed the Fort Worden Kite Making Conference both organizing details and teaching classes.
Kathy has also served as 1st Vice President (1991-1992) of the American Kitefliers Association. Kathy was involved in the group that originally created the AKA’s Rules for Kitemakers’ Competitions. In 1996, Kathy was awarded the David Checkley Lifetime Achievement Award by the Kite Trade Association International (KTAI).
Since closing Gasworks Park Kite Shop in 2012, Kathy has traveled to kite festivals all over the world, including Dieppe, France and Cervia, Italy. She was a featured instructor at the 2015 Oregon Kitemakers Retreat, where she taught her Mini Star Flake Kite that was first introduced at the 1984 AKA convention.
During her lifetime, there is not many people that can match her dedication to the kite community and her innovation in kite making.
It is for these reasons that we nominate Kathy Goodwind for the Steve Edeiken Memorial Kiteflier of the Year Award.
Signed,
Barry Matties
Kay Buesing (Robert Ingraham Award Winner – 2013)
Mel Hickman (Robert Ingraham Award Winner – 2010)
Marla Miller (Robert Ingraham Award Winner – 2008)
Ron Miller
[hr]