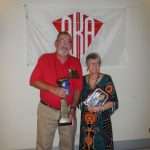 I have long been impressed by the description of the primary Edeiken Award qualifications. “The Kiteflier of the Year will be a person who, during their lifetime, will have shown friendly, loving, fair, and even-handed concern for people in general, but kitefliers in particular.”
While most kiters exhibit these qualities, some of our members really stand out. And one couple in particular is a life-long role model for consistently positive, friendly, and proactive behavior. No matter what the conditions or circumstances, I don’t think I have ever seen them not smiling at a kite festival.
For more than 30 years, our nominees have worked to teach kids to fly kites and have appeared at dozens if not hundreds of events with kite kits and packets of information for teachers.
For more than 30 years, our nominees have promoted the AKA and kiting with information tables, free magazines, and a delightful exhibit of miniature kites.
For more than 30 years, our nominees have consistently been one of the top recruiters of members to our Association.
Along the way, our nominees have helped pursue world records for the largest gathering of children flying kites together. They have developed mass-production, low cost kites for the masses. They have taught workshops. One of them has served more years on the AKA board than anyone else; and served three terms as our President.
And throughout it all, they have continued to smile.
Consider please, the following:

For a lifetime of friendly, loving, fair, and even-handed concern for people in general, but kitefliers in particular, we are pleased to nominate Richard and Marti Dermer.
David Gomberg
Susan Gomberg
Susan Skinner
Darrin Skinner
Mel Hickman