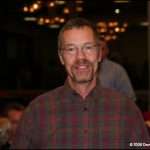 The Ingraham Award is used to recognize people for their long term support for the American Kitefliers Association and its goals. The efforts on behalf of the AKA by recent honorees have been very visible in their nature with most AKA members aware of the contributions that have been made.
Our nominee is one those “invisible” supporters without which the AKA could not function as it does or provide the services it offers.
Our nominee is George Emmons of Into The Wind.
When George started Into The Wind in 1980 with Jim Glass, he did so with the philosophy that if you promoted kiting first and offered your customers quality products, sales would follow. That philosophy seems to have worked because Into The Wind now employs 20 people and is easily one of the most recognized names in the selling of kites and kite related products by telephone and internet.
And, believe it or not, George still tests and flies each product before it is offered in their catalogue.
Another thing that has not changed since 1980 is George’s support of the American Kitefliers Association. For example:
Each year, Into The Wind makes generous donations to the AKA auction (and George is known to have purchased a “few” items at the auction as well).
The annual National Kite Month effort benefits from George’s support.
Into The Wind is the longest running advertiser in KITING.
While accurate numbers are not available, we know that Into The Wind has referred at least 250 members to the AKA. The phone will ring at the AKA office and the person on the line will say, “I was just talking to Into The Wind and they said I should join the AKA.”
Every time Into The Wind refers someone to us for whatever reason, they support us with their credibility, they offer tacit endorsement of our association.
For more than a quarter of a century, George Emmons and Into The Wind have quietly, “invisibly” supported the AKA. Presenting them with the Ingraham Award would provide long overdue recognition for that support.
– Submitted by Mel Hickman, AKA Executive Director; Maggie Vohs, KTAI Executive Director; David Gomberg, Past AKA President and Edeiken Trophy winner; Cliff Quinn, AKA Treasurer and past Ingraham Award winner; and Billy Jones, longtime AKA supporter and Into the Wind customer.