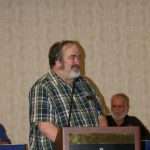 The criteria for the Robert Ingraham Award states that the award should go to: Kitefliers, who, during their lifetime career in kiting, have exemplified outstanding volunteerism and service to the American Kitefliers Association, and, who, in the true spirit of Robert Ingraham, have given unselfishly of their time to help the AKA and promote kiting in general.
This nominee has served the AKA in many capacities. He has been treasurer; auction chair; auction staff; kite art news contributor; Kiting contributor; a member of numerous boards and committees; insurance guru; the repository of our institutional memory; and that cheery voice at the other end of the phone call always wishing the caller to “Have a breezy day
If you haven’t guessed by now, this nominee is Mel Hickman. Mel came to the board in 1991 as treasurer with David Gomberg. He served as treasurer from 1991 thru 1994. Four years as treasurer alone would be more than enough to qualify a member for this award. But, that’s not all Mel has done for the AKA.
After serving as treasurer, he moved to the Executive Director’s position, where he still remains, and will for at least another 2 years. Now, some may say, that this is a paid position, but the work and time devoted to the AKA is much more than what his contract makes provision for.
Mel has been part of the board of directors longer than anyone else in the AKA now or ever. He reminds us of critical dates, gets the agenda set for each board meeting, notices when documents need to be revised, gently keeps us on track or distracted as the need arises, and can be counted on for an appropriate historical anecdote.
Each year at convention, Mel helps with the auction. Actually some years it is more than that. He has served as auction chair more than once, another much needed but thankless job.
Mel has been part of the AKA as it transitioned from the early days of some having email and others only fax or mail to today when memberships are automatically processed online and board meetings on held via computer conference calls. The demands and challenges have always been there, and continue to change. Each year after the election, Mel helps the new members to become adjusted to the board, and deals with the transition of leadership, never an easy task.
Have many times have you heard or said: “I don’t know, call Mel.”? He has become our institutional memory of past practices; people then and now; problems and solutions; and sounding board. Numerous festival organizers have realized on Thursday or even Friday that the sanctioning request had been neglected. Yet by the weekend, every one of those festivals had an insurance certificate and the festival went on as planned. Mel again made miracles happen.
Looking thru past issues of Art Kite News and Kiting, reminds us how often Mel wrote articles for both. At one point, he had a regular bi-monthly column in Kiting. His contributions to Art Kite News included tax tips for artists, and some fun stories about test flying a ghost kite.
We strongly urge the committee to award the Robert Ingraham Award for 2010 to Mel Hickman to honor all his contributions to the AKA. We would not be the association we are today without him.
Thank you, and have a breezy day!
Barbara Meyer
I’ll second that, with great pleasure.
Brooks Leffler
Cliff Quinn
Maggie Vohs
James Patten
Richard Dermer