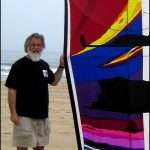 We wish to nominate for the Leland Toy Memorial Kite Artist of the Year Award our longtime friend JON BURKHARDT.
We first met Jon and his kites at the 1979 Maryland Kite Society annual meeting in Baltimore. He flew a beautiful kite, named Blackfoot’s Magic Ground, and it was surprising because it was of unusually professional quality and it was one of his firstkites.
It turned out that this was only one of a long series of stunning kites we would see from Jon. He usually named them. There were:

Jon often tries new images and techniques, and his kites win top awards. To name a few; the AKA’s Grand National Champion kite, the first prize for the best kite display at the International Kite Tour of India, and his kites as featured at the Billings, Montana International Airport.
We also know Jon as a leader of the Maryland Kite Society for many years and an active worker in many positions in the AKA. He has been the head judge at many kite festivals, including the Smithsonian. He has been active in workshops for children. He has written articles on kiteflying for numerous publications. He was the chief author for the last two additions of the AKA’s “Rules and Guidelines for Kitemakers’ Competitions” as well as the rulebook currently used for the Smithsonian. He has presented workshops at many AKA conventions, MKS Kite Retreats, the Fort Worden Kitemakers Conference and the Midwest Area Kitemakers Retreat. Jon has been a vocal advocate of the need for kitefliers to appreciate their fellow enthusiasts. He hosted Lee Toy for several days on his motorcycle tour of the U.S. He has contributed a kite to the AKA’s auction every year for over 20 years. No wonder that in 1998 Jon was awarded the Steve Edeiken Memorial Kiteflier of the Year Award. It was certainly well deserved.
But the Leland Toy Award is meant to recognize kiters who inspire others to see kites as an authentic art form, and who show generosity of spirit and willingness to share his or her energies to that end. In these respects, we feel Jon is especially qualified. We might say that his life itself is as beautiful in its way as his kites are in the sky. We recommend Jon Burkhardt for the Leland Toy Memorial Kite Artist of the Year Award.
Dated: August 29, 2007
Signed: Valerie Govig
Signed: W.R. Bigge
Signed: Jewell Price