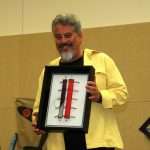 When I think of the Lee Toy award, I am forced to pause. I know many wonderful kitemakers, but few that rise to the next level. What is that next level? When you see a kite you have never seen before, yet recognize immediately the artist you know to be at the other end of the string. When I compose a mental list of those few truly unique and inspiring kitemakers that I put into this elite category, it reads like the list of past winners. One name is noticeably absent on the list of past winners, and that name is Ron Gibian.
For as long as I have been in kiting (and many years before that) Ron has always been there. At festivals around the country and around the globe, he shares his beautiful kites and his love of kiting. Generous with his time and experience, he takes time to teach what he knows and share what he has learned, and not just at workshops and retreats, but also on the edge of the flying field or at the dinner table. I have never met anyone so relentlessly encouraging and positive toward upcoming kitemakers. Whether on the microphone, on the judging field or with the K-Files column, he works tirelessly to bring along the next generation of kitemakers and to recognize those who are achieving kitemaking success.
In the end though it comes down to the kites, and Ron Gibian’s body of work stands among the greatest kitebuilders of our age. The list of awards is long and impressive, but it doesn’t need repeating. The kites speak for themselves. Innovative in form and construction, they are meticulously built and precisely put together. Signature shapes like the Astroglide and Stratoglide are as much a part of our kiting lexicon as deltas and rokkakus. Ron’s unique graphic style is bold and distinctive, yet through many different iterations it remains instantly recognizable. There is nothing quite as impressive as a group of themed kites in the sky, and with Ron’s work you can organize the spectacle by shape, color or graphic style. I have had the privilege of seeing it done multiple ways at the same festival. Each of these presentations draws you in to different aspects of his work and makes you appreciate the kites again and again. That is the hallmark of true artistry.
While this is a nomination of Ron Gibian in recognition of his amaTzing body of work, it would be incomplete without mentioning Sandy. ogether they form a team of kite ambassadors who have brought the artistry of color and flight to spectators and kitefliers the world over. Their generosity and warmth are a welcome presence both on and off the flying field. I count myself among many who are better kitemakers because of their friendship and inspiration.
In recognition of his amazing creations and tireless efforts to promote
kitebuilding and flying, I nominate Ron Gibian for the 2007 Lee Toy Memorial Kite Artist of the Year.
Sincerely,
Arnold Stellema
Ronda Brewer
Jeff Erzin