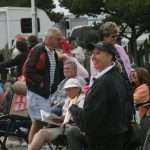 The Ingraham Award recognizes those who have volunteered unselfishly to help the AKA and to promote kiting in general. Our nominee has done all that and more. For who has given more of their time, energy, creativity, advice, and effort to the Association, and with less credit and recognition, than Susan Gomberg.
Susan Gomberg was the co-chair of the 1990 AKA convention in Seaside. That was back when we relied on volunteers for a job that now pays more than $20,000. And Seaside 1 still ranks as one of our largest conventions.
After actually running a convention, the next most difficult job is that of Auction Chair. Susan has run the auction three times and each time set records for income as well as efficiency.
Susan has served as a sport kite judge at events around the country and around the world. In 1992, she suffered through 90 novice fliers in six heats at the first Japan Cup. It was over 100 degrees.
Susan has also served as a kitemaking judge at the National Convention and as a member of the KiteMaking Committee. She refuses, however, to step foot on a rokkaku field.
For the past three years, Susan has chaired the Convention Hospitality Committee, personally greeting each registrant and making sure their questions and needs were properly addressed.
And over the past 15 years, she has answered questions, responded to emails, promoted membership, and helped members and potential members in countless ways at countless events in countless places around the world. Though never elected to anything, Susan Gomberg has quite simply been AKAs Ambassador at Large, our hostess, and our smile.