South Jersey Kite Flyers would like to nominate Betty Hirschmann for the Ingraham Award
Kiting History: 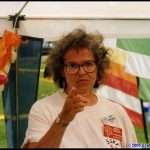 Betty’s first interest in kiting was in the summer of 1991 when she bought her first kite, a High Fly Kite Company Tori Tako Sport Kite. In 1993, Betty competed, as a novice dual line flier, in all of the events in the Eastern League Sport Kite circuit. At the end of the competition season, she was invited to participate in the Nationals at the Seaside, OR. Convention. After competing for another year her interest turned to sport kite judging, and she volunteered for this duty for the next four years at various Eastern League events.
While attending these events, she was introduced to the world of single line kites. This led to attending kitemaking workshops, where she found a whole new type of challenge.
Eventually, her interests shifted again to the business end of the American Kitefliers Association, and when asked to come on board as Secretary she accepted the job.
Betty is one of the backbones of South Jersey Kite Flyers (SJKF) and the American Kitefliers Association, working behind the scenes in many aspects, both physically and financially. She is also multi-talented, winning awards in both kitemaking and sport kites flying.
Service to the AKA:
Betty has been an American Kitefliers Association (AKA) member for 13+ years, and has served in the position of Secretary she has been secretary since 1994, she is the longest standing Secretary in AKA history. Additionally, she has served as Chair of the Elections Committee, the Membership Committee and while still serving in these capacities has taken on the Chair of the Contracts Committee for the past four years.
Her work with the AKA has been very time consuming but she loves it. Betty is also a great promoter of the AKA, always touting it’s merits and trying to increase its membership, she did this even before she was Chair of the AKA Membership Committee, most recently helping to staff the AKA information/recruiting booth at the Wildwood International Kite Festival.
At her first convention in 1991, she volunteered to work at the registration desk in an effort to meet people in the kiting world. Since that date she has attended every convention and has continued to lend a hand not only to the registration area, but has worked in auction receiving, entering data into the computer for the auction program, working the payment table at the auction, and attending all Board of Directors meetings and Annual Meetings in her capacity as AKA Secretary.
In 1994, the South Jersey Kite Flyers (SJKF) were formed. Betty, as a founding member, was asked to serve as their Recording Secretary She is the only Secretary that SJKF has ever had. She has served under all the Presidents, and each has been more than pleased with her work.
Betty is always the first person to donate funding for kiting activities. Whether it was to sponsor pins, trophies, or a guest flyer to WIKF this year, she always has on open pocketbook. She rarely takes credit for what she does; instead she attributes her work to the SJKF.
Interpersonal qualities:
Betty has met and made many friends throughout the kiting community, not just locally but through her travels nationally and internationally. While out on the kite field, it is not unusual for Betty to drop what she is doing and go to the aid of someone trying to make their new kite fly. She is friendly and tries her best to make others feel comfortable upon meeting her
Communications:
Betty has written several articles for Kiting, and for the SJKF newsletter “Windwriters”. She was recognized by SJKF for submitting 17 articles in one year and is noted as being their most prolific writer. She has been interviewed and photographed by various local newspapers in the Philadelphia / South Jersey area. Betty has worked hard to spread the joy of kiting to kids of all ages, and to extol the advantages of being a member of the AKA.
Educational activities:
Regarding kids kitemaking workshops, Betty is one of SJKF’s most active members. She has been involved in programs held in schools throughout the South Jersey area, and participated in children’s workshops in Bogotá, Columbia, South America.
Additionally, for the past three years she has helped in organizing / conducting a program whereby families come together to make and fly kites. This is a program designed to keep kids off the streets and away from drugs, and a way for all family members to participate in a worthwhile project.
Craftsman:
While supporting kitemakers by buying their kites has been her preferred way of obtaining kites, she has also made quit a few kites, recently a fighter kite at the Oregon Kitemakers Retreat and entered it in the Comprehensive Competition at a MIKE/MASKC event where she received 1st place in the Fighter Kite competition. She has been fortunate enough to attend the workshops of many master class kitemakers, and after a year or so of associating with these kite artists she started to do some judging of comprehensive kites. Betty has judged at the Comprehensive Kitemaking Competitions at several Conventions.
Thank you for considering Betty,
Good Winds……
Michael F. Dallmer