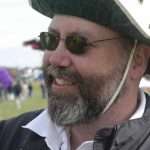 The Ingraham award is intended for service to the AKA and I can think of no more deserving recipient than the steward of our finances, Treasurer Al Sparling.
When Al became chief financial officer three years ago, the Association faced a significant monetary shortfall. We were spending more than we were earning and reserves were quickly evaporating. Under Al’ s leadership, expenditures were revised and new income programs developed. His attention to budget matters at Board meetings became legendary and as the crisis abated, Al became fondly known as the “ AKA Grinch” .
One program in particular deserves special note. Al became the driving force behind the innovative AKA raffle. He recruited prizes, submitted promotions to the web page, and then personally entered each credit card ticket purchase. This required nightly attention since records need to be regularly updated. With more than $50,000 in sales since it started, Al Sparling has entered over 10,000 computerized transactions. He has also taken care to get the physical tickets to each regional drawing in now famous, hermetically sealed security envelopes.
Al has been an active member of the AKA executive and recently retired after eight years as the MidWest Regional Representative. He traversed the three state area each week to attend a record number of festivals and workshops during his term.
The AKA has benefited from Al Sparling’ s, commitment, contribution, and conscientious attention to detail. He would be the first to say that others have been as involved and as dedicated. We say he’ s the best and should have his name added to the prestigious awarded named for our founder.