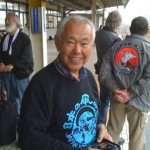 The significance of what Modegi-San has done for kiting, over his lifetime, cannot be overstated.
He has consistently, over the course of decades, introduced and underwritten incredible kite makers travels around the world, making it possible for the rest of us to benefit…be exposed to…introduced to…touched by…the immense kite making talent that lies within the Japanese borders…every year he brings a delegation to the AKA convention for the enjoyment of others.
Masaaki Modegi is instrumental in organizing and promoting many major kite events in and outside of Japan.
He has dedicated his and his family’s life to the Tokyo Kite Museum, a place where kite makers from all over the globe showcase and display their kites.
Modegi-San is also an author, as well as an authority, on the great kite masters of Japan, past and present.
He is an international treasure within the worldwide kiting community.
It is his significant contributions to kiting that Masaaki Modegi has given over his lifetime that makes him a perfect candidate for the ‘Lee Toy Circle Award’.
Without a patron for the arts…there would be no arts!
Thank you for considering Modegi-San for the 2001 ‘Lee Toy Circle Award’.
Warmest Regards,
Meg Albers